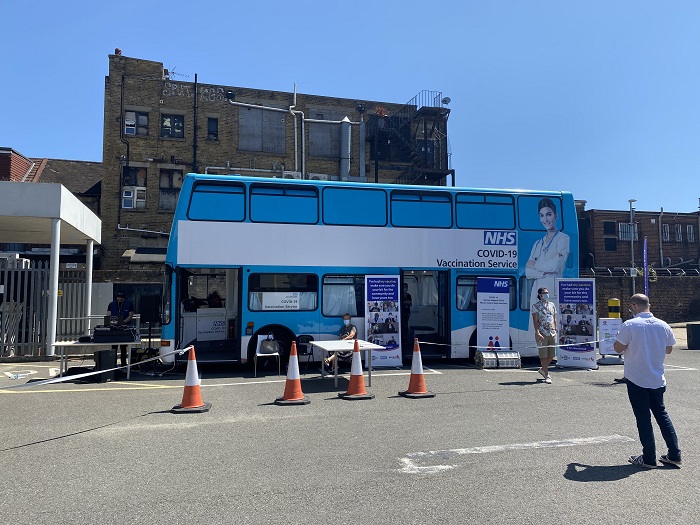 The U.S. Supreme Court on Jan. 13, 2022, blocked the Biden administration’s vaccine-or-test mandate, which applied to virtually all private companies with 100 of more employees. But it left in place a narrower mandate that requires health care workers at facilities receiving federal funds to get vaccinated. The ruling comes at a time when the number of COVID-19 cases and hospitalization rates continues to soar throughout the United States as a result of the omicron variant.

We asked Debbie Kaminer, a professor of law at Baruch College, CUNY, to explain the ruling’s impact.

1. What did the Supreme Court decide?

The court’s six conservative justices held that the Occupational Safety and Health Administration exceeded its power in issuing the mandate on private companies, which would have covered about 80 million workers.

The majority opinion distinguished between workplace safety and occupational health, determining that “although COVID-19 is a risk that occurs in many workplaces, it is not an occupational hazard in most,” as it can spread wherever people gather. The majority also expressed concern that the mandate was a “blunt instrument” and did not distinguish “based on industry or risk of exposure to COVID-19.”

The three liberal judges dissented, arguing that “COVID-19 poses special risks in most workplaces, across the country and across industries.”

At the same time, by a narrower 5-4 vote, the Supreme Court allowed continued enforcement of a mandate requiring health care workers at facilities that receive government funding through Medicare or Medicaid to be vaccinated. According to the court, this mandate by the Department of Health and Human Services “fits neatly” within the congressional power given to the agency because of the increased risk associated with health care workers becoming ill with COVID-19 and infecting their patients.

2. How does this affect other worker mandates?

Despite this Supreme Court ruling, many types of COVID-19 vaccine mandates remain legally enforceable and continue to be an important tool in ensuring Americans get vaccinated.

Approximately half of all states have some type of vaccination mandate, and the enforceability of these mandates is not affected by the court’s latest decision. While the Supreme Court limited the authority of administrative agencies, this does not affect the ability of state and local governments to pass laws regulating the health and safety of the public. These mandates most commonly cover health care workers and government employees, while some cover all employees. New York City, for example, recently passed a mandate covering most employees who work in person or interact with the public, and this mandate is not affected by the court’s decision.

Some states and localities have also issued vaccine mandates covering customers in public spaces. For example, New York City has broadly mandated the vaccine at most indoor venues, including restaurants, gyms and theaters.

Many private businesses, on their own authority, require employees to get vaccinated. This includes major companies such as Citigroup, Goldman Sachs, Delta Airlines, Google and CVS. The ruling doesn’t affect their legal ability to impose such mandates – though it may make companies that had been mulling a mandate less likely to institute one for their workers.

In all, about 36% of U.S. workers are required by their employers to get vaccinated, according to Society for Human Resource Management, an industry group.

3. How about school mandates?

Educational institutions also continue to play an important role in mandating COVID-19 vaccination, and this is not affected by the court’s decision.

Over 1,000 universities have some form of vaccine mandate, and in August 2021 the Supreme Court refused to block Indiana University’s mandate. Unlike the OSHA case, this did not involve the authority of an administrative agency.

Additionally, as a result of the omicron outbreak, a growing number of universities are now also requiring students, faculty and staff to get the COVID-19 booster.

4. Will this affect the government’s ability to protect public health?

The court’s decision is significant in that it limits the authority of government administrative agencies generally, and specifically limits the power of OSHA to protect public health.

Still, this decision will not meaningfully restrain the government’s ability to fight pandemics more generally, as federal statutes, state and local vaccine mandates, public university mandates and public K-12 school mandates are not affected by the decision.

The Supreme Court essentially determined that because the risk of COVID-19 exists both within as well as outside the workplace, OSHA does not have the authority to generally protect employees across workplaces. In doing so, the majority essentially determined that the court – and not OSHA – is the institution that should make health policy and decide which workplaces are high enough risk that a vaccine mandate is appropriate.

The dissenting justices responded with incredulity: “In the face of a still-raging pandemic, this court tells the agency charged with protecting safety that it cannot respond in the most effective way possible. Without legal basis, the court usurps a decision that rightfully belongs to others.”

The majority did recognize, however, that “where the virus poses a special danger because of the particular features of an employee’s job or workplace, targeted regulations are plainly permissible.”

It remains to be seen how narrow a government agency mandate must be to be upheld by the Supreme Court.

While the majority of Americans are already fully vaccinated, and approximately 75% of all Americans have received at least one dose of the COVID-19 vaccine, mandates will likely remain an important tool in continuing to fight the pandemic.