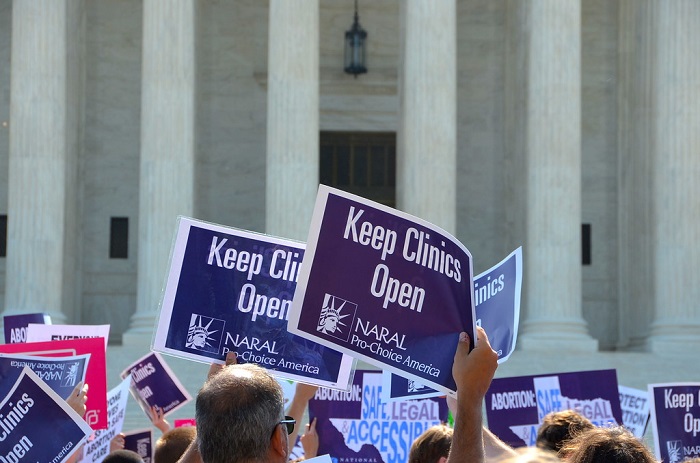 Patients were in the lobby, waiting, the moment it became a post-Roe America.

The staff at Alamo Women’s Reproductive Services Clinic in San Antonio had just received a call from their attorney: Abortion procedures in Texas would have to stop immediately. The dozen or so patients in the lobby Friday morning would have to be turned away. The clinic staff would have to be the ones to tell them.

Andrea Gallegos, the clinic’s administrator, and the rest of the staff walked out and addressed the room: “The Supreme Court made this decision today and, unfortunately, your geographical location affects your bodily autonomy,” she said they told waiting patients.

Gallegos watched each word land like a blow. People cried. They screamed. They begged for help, she said. It was “complete despair.”

Hours later, the clinic had emptied of all but those who had received their abortions hours or minutes before Roe v. Wade, the 50-year-old court case that enshrined abortion as a right, was overturned by the Supreme Court Friday, leaving the question of abortion access up to individual states. Only those with follow-up appointments could be seen.

Gallegos and her staff called about 20 people who were scheduled to come in that day. Some were caught off guard, Gallegos said. “Why today? Why the day of their appointment did this happen?” patients told her.

Those turned away were patients who were now outside an already small window: In September, Texas banned abortion past six weeks of pregnancy. That law was the first in a series of abortion restrictions passed in states across the country in the last year that served as a preview of life after Roe. Texas also has a “trigger” law that would ban abortions from the moment of conception and would go into effect as soon as about two months from now. But in the chaos of Friday’s Supreme Court ruling, clinics across the state chose to cease all abortion services in the case that the ban would come into effect even sooner. Texas Attorney General Ken Paxton said Friday that, under a separate pre-Roe ban in the state, “abortion providers could be criminally liable for providing abortions starting today.”

Across Texas and other states where trigger bans are in place and where, hour-by-hour, abortion is being completely outlawed, the same scene was playing out simultaneously: Waiting rooms were emptied. Waitlists were pulled up. Phone calls were made to people who had their abortions scheduled.

At Whole Woman’s Health clinics across Texas, staff received notice in a conference call Friday morning. Marva Sadler, the senior director for clinical services for Whole Woman’s, an abortion provider with locations in five states, said clinic managers brought patients in from the lobby one by one to deliver the news.

“Each patient was given the opportunity to have their reactions and their emotions privately,” Sadler said, conversations clinic staff had become well-versed in having over the 10 months since Texas’ ban had passed.

It was difficult to be an abortion provider in the only state at the time to ban the procedure so early in gestation, Sadler said.

Now that that reality is rippling through America, “you realize it’s so many more people and so many more families that are going to be devastated and affected,” she said. “It’s really hard to wrap your mind around.”

When the news hit as she was driving, she pulled over to the side of the road and wept before she addressed her staff. Then she and her staff got to work calling clinics in other states where abortion is still legal. Could they take patients? Could they help coordinate travel?

Gallegos is also working to refer patients out to clinics in nearby states — Colorado, Kansas and New Mexico — where abortion is still protected. But many of their patients are low-income. They were choosing an abortion in part because they feared being unable to afford a child. They don’t have the funds to travel.

“These are patients that oftentimes are already mothers, they are already taking care of children, some are living paycheck-to-paycheck,” Gallegos said. “These are the folks that are going to be forced into having another child if they can’t make it out of state, and those effects, all the way around, are just devastating. Several say, ‘How am I supposed to do this? I took off work to be here today and now you want me to travel?’”

Clinic staff is gripped by uncertainty. Many have been providing abortion services for decades. A physician at the San Antonio clinic was providing abortions pre-Roe, Gallegos said — and now he must consider how he will do that “post-Roe,” she notes. Sadler has been working to provide abortion access for about two decades.

She said the fall of Roe only strengthens her determination, and that of her colleagues, to continue providing reproductive care, in whatever form, as long as they’re able.

Her staff is standing by, she said.

“If I told them we could see patients at midnight tonight,” Sadler said, “I have no doubt that every last one of them would show up without question.”