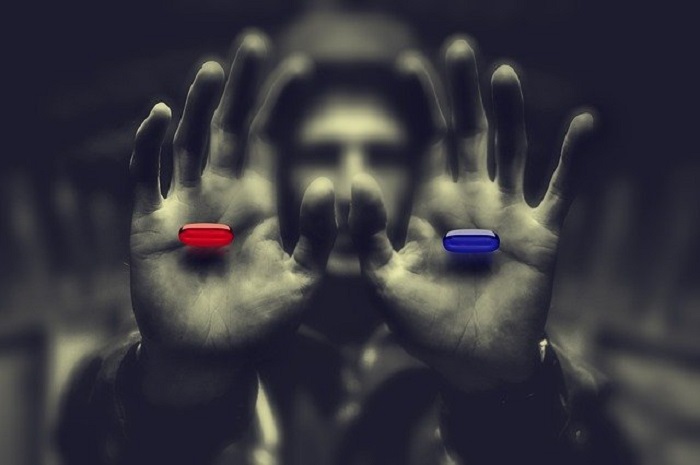 The Red Pill Or The Blue Pill? The Matrix Is Already Here

About a year ago I began to follow my interest in health and fitness on Instagram. Soon I began to see more and more fitness-related accounts, groups, posts and ads. I kept clicking and following, and eventually my Instagram became all about fit people, fitness and motivational material, and advertisements. Does this sound familiar?

While the algorithms and my brain kept me scrolling on the endless feeds, I was reminded of what digital marketers like to say: “Money is in the list.” That is, the more customized your group, people and page follows, the less time and money is needed to sell you related ideas. Instead, brand ambassadors will do the work, spreading products, ideas and ideologies with passion and free of charge.

I’m a psychiatrist who studies anxiety and stress, and I often write about how our politics and culture are mired in fear and tribalism. My co-author is a digital marketing expert who brings expertise to the technological-psychological aspect of this discussion. With the nation on edge, we believe it’s critical to look at how easily our society is being manipulated into tribalism in the age of social media. Even after the exhausting election cycle is over, the division persists, if not widening, and conspiracy theories continue to emerge, grow and divide on the social media. Based on our knowledge of stress, fear and social media, we offer you some ways to weather the next few days, and protect yourself against the current divisive environment.

The promise, the Matrix

Those of us old enough to know what life was like before social media may remember how exciting Facebook was at its inception. Imagine, the ability to connect with old friends we had not seen for decades! Then, Facebook was a virtual dynamic conversation. This brilliant idea, to connect to others with shared experiences and interests, was strengthened with the advent of Twitter, Instagram and apps.

The artificial intelligence behind these platforms determines what you see based on your social media and web activity, including your engagement with pages and ads. For example, on Twitter you may follow the politicians you like. Twitter algorithms quickly respond and show you more posts and people related to that political leaning. The more you like, follow and share, the faster you find yourself moving in that political direction. There is, however, this nuance: Those algorithms tracking you are often triggered by your negative emotions, typically impulsivity or anger.

As a result, the algorithms amplify the negative and then spread it by sharing it among groups. This might play a role in the widespread anger among those engaged in politics, regardless of their side of the aisle.

Eventually, the algorithms expose us mostly to the ideology of one “digital tribe” – the same way my Instagram world became only superfit and active people. This is how one’s Matrix can become the extremes of conservatism, liberalism, different religions, climate change worriers or deniers or other ideologies. Members of each tribe keep consuming and feeding one another the same ideology while policing one another against opening up to “the others.”

We are inherently tribal creatures anyway; but particularly when we’re scared, we regress further into tribalism and tend to trust the information relayed to us by our tribe and not by others. Normally, that’s an evolutionary advantage. Trust leads to group cohesion, and it helps us survive.

But now, that same tribalism – along with peer pressure, negative emotions and short tempers – often lead to ostracizing those who disagree with you. In one study, 61% of Americans reported having unfriended, unfollowed or blocked someone on social media because of their political views or posts.

Higher levels of social media use and exposure to sensationalized news about the pandemic is linked with increased depression and stress. And more time spent on social media correlates with higher anxiety, which can create a negative loop. One example: The Pew Research Center reports 90% of Republicans who get their political news only from conservative platforms said the U.S. has controlled the COVID-19 outbreak as much as possible. Yet less than half of Republicans who rely on at least one other major news provider thought so.

The Matrix does the thinking

Human thinking itself has been transformed. It’s now more difficult for us to grasp the “big picture.” A book is a long read these days, too much for some people. Scrolling and swiping culture has reduced our attention span (on average people spend 1.7 to 2.5 seconds on a Facebook news feed item). It has also deactivated our critical thinking skills. Even really big news doesn’t last on our feed longer than a few hours; after all, the next blockbuster story is just ahead. The Matrix does the thinking; we consume the ideology and are bolstered by the likes from our tribemates.

Before all this, our social exposure was mostly to family, friends, relatives, neighbors, classmates, TV, movies, radio, newspapers, magazines and books. And that was enough. In that, there was diversity and a relatively healthy information diet with a wide variety of nutrients. We always knew people who were not like minded, but getting along with them was normal life, part of the deal. Now those different voices have become more distant – “the others” we love to hate on social media.

Is there a red pill?

We need to take back the control. Here are seven things we can do to unplug ourselves out of the Matrix:

It’s time to take the red pill. Take these seven steps, and you won’t give in to the Matrix.

This piece was co-authored with Maryna Arakcheieva, who is expert in digital solutions and marketing.

Published in FEATURED STORY and HEALTH