Arrests made in theft of 18k gold toilet in England

Yesterday, Thames Valley Police said they had arrested a second man in connection with the theft of a gold toilet. The toilet, an artwork, was stolen on Saturday from Blenheim Palace in Oxfordshire, England. Another man, who was was arrested on the day of the theft, was released on bail. The toilet has not been recovered. 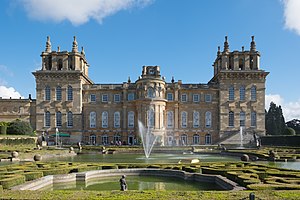 Blenheim Palace seen from the water terraces in 2016
Image: DeFacto.

Police arrested a 36-year-old Cheltenham man on suspicion of conspiracy to burgle. They subsequently released him pending investigation. On Saturday they arrested a 66-year-old man on suspicion of burglary, and released him on bail till October. “We are continuing to investigate this incident and have made a second arrest in connection with it. Our priority is to locate the stolen item, and I would urge anyone with any information to contact police by calling 101“, said Detective Inspector Steven Jones.

The toilet is an artwork entitled America made by Italian artist Maurizio Cattelan. It is a fully functioning toilet made from 18-karat gold. Dominic Hare, chief executive of the palace, placed the value of the artwork in the range of five to six million US dollars. It had been fully plumbed and installed for visitors to use at Blenheim. When it was removed by the burglars it caused flooding and water damage to the building. Police said on Monday they believe the theft involved a group of thieves and multiple vehicles.

“At first, when they woke me up this morning with the news, I thought it was a prank: Who’s so stupid to steal a toilet?” wrote Cattelan, the artist, in an e-mail to The New York Times. “I had forgotten for a second that it was made out of gold.”

Back in 2017, the artwork was offered to Donald Trump, the president of the United States. Dominic Hare said the toilet represented a “comment on the American dream”.