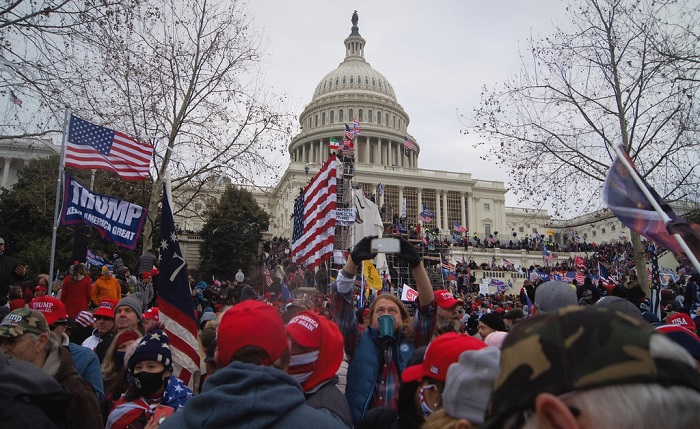 When Attorney General Merrick Garland said on Jan. 5, 2022, that he would prosecute anyone involved in the Capitol riots, he was not only laying out his approach to the sprawling investigation of that attack. He also appeared to be responding to a growing number of people who have pressured him to announce he would criminally charge former President Donald Trump for the role he played in the day’s events.

“The Justice Department remains committed to holding all January 6th perpetrators, at any level, accountable under law — whether they were present that day or were otherwise criminally responsible for the assault on our democracy,” said Garland. “We will follow the facts wherever they lead.”

No U.S. ex-president has ever been criminally charged.

Prosecuting current or past top officials accused of illegal conduct seems like an obvious decision for a democracy – everyone should be held accountable and subject to the rule of law.

But there are consequences to prosecutions of these officials – not just for them, but for their countries.

They are chosen by a nation’s citizens or their parties to lead. They are often popular, sometimes revered. So judicial proceedings against them are inevitably perceived as political and become divisive.

Other countries’ former presidents are being investigated, prosecuted and even jailed worldwide.

In Bolivia, ex-President Jeanine Áñez was arrested on terrorism, conspiracy and sedition charges on March 13, 2021, and is headed to trial soon. A week before, former French President Nicolas Sarkozy was sentenced to prison for corruption and influence peddling.

Israel’s former Prime Minister Benjamin Netanyahu is currently on trial for corruption. Jacob Zuma, the former president of South Africa, is in a prolonged fight against corruption charges and was sentenced to 15 months in jail for contempt of court.

If the prosecution of past leaders is brought by a political rival, it can lead to a cycle of prosecutorial retaliation. Despite the independence of the U.S. Justice Department, headed by Garland, a prosecution of Trump could be seen as political since Garland was appointed by President Joe Biden.

This is partly why U.S. President Gerald Ford pardoned Richard Nixon, his predecessor, in 1974. Despite clear evidence of criminal wrongdoing in the Watergate scandal, Ford feared the country “would needlessly be diverted from meeting (our) challenges if we as a people were to remain sharply divided over” punishing the ex-president.

Public reaction at the time was divided along party lines. But many people now see absolving Nixon as necessary to heal the U.S.

Strong democracies are usually competent enough – and the judicial system independent enough – to go after politicians who misbehave, including top leaders. Sarkozy is France’s second modern president to be found guilty of corruption, after Jacques Chirac in 2011. The country didn’t fall apart after Chirac’s conviction.

In mature democracies, prosecutions can hold leaders accountable and solidify the rule of law. South Korea investigated and convicted five former presidents starting in the 1990s, a wave of political prosecutions that culminated in the 2018 impeachment of President Park Geun-hye.

But even in mature democracies, prosecutors or judges can weaponize prosecutions.

Some observers say the three-year prison sentence handed down to France’s Sarkozy – whose corruption conviction involves kickbacks and an attempt to bribe a magistrate – was too harsh.

Overzealous prosecution versus rule of law

Overzealous political prosecution is more likely, and potentially more damaging, in emerging democracies where courts and other public institutions may be insufficiently independent from politics. The weaker and more beholden the judiciary, the easier it is for leaders to exploit the system, either to expand their own power or to take down an opponent.

Ex-President Luiz Inácio “Lula” da Silva, a former shoeshine boy turned popular leftist, was jailed in 2018 for accepting bribes in what many Brazilians felt was a politicized effort to end his career.

A year later, the same prosecutorial team accused the conservative former President Michel Temer of accepting millions in bribes. After his term ended in 2019, he was arrested; his trial was later suspended.

Both Brazilian presidents’ prosecutions are part of a years-long sweeping anti-corruption probe by the courts that has jailed dozens of politicians. Even the probe’s lead prosecutor is accused of corruption.

Brazil’s crisis either shows nobody is above the law – or tells the public that their government is incorrigibly corrupt. When that happens, it becomes easier for politicians and voters to view leaders’ transgressions as a normal cost of doing business.

For Lula, a conviction didn’t necessarily end his career. He was released from jail in 2019 and in March 2021 the Supreme Court annulled his conviction. He is now running to reclaim the presidency.

Mexico has a different approach to prosecuting past presidents: It doesn’t do it.

During the 20th century, Mexico’s ruling Institutional Revolutionary Party, or PRI, established a system of patronage and corruption that kept members in power and other parties in the minority. While making a show of going after smaller fish for corruption and other indiscretions, the PRI-run legal system wouldn’t touch top party officials, even the most openly corrupt.

Impunity kept Mexico stable during its transition to democracy in the 1990s by placating PRI members’ fears of prosecution after leaving office. But government corruption flourished, and with it, organized crime.

Mexico is far from the only country to overlook the bad deeds of past leaders, including those who oversaw human rights violations. Our research finds that just 23% of countries that transitioned to democracy between 1885 and 2004 charged former leaders with crimes after democratization.

Protecting authoritarians may seem contrary to democratic values, but many transitional governments have decided it is necessary for democracy to take root.

This strategy helped the country transition to majority Black rule in 1994 and avoid a civil war. But it hurt efforts to create a more equal South Africa: It still has one of the world’s highest racial wealth gaps.

Corruption is a problem, too, as former President Zuma’s prosecution for lavish personal use of public funds shows. But South Africa has a famously independent judiciary, and Zuma’s prosecution is supported by the current president. It may yet deter future misdeeds.

Israel didn’t wait for Prime Minister Netanyahu to leave office to investigate wrongdoing. He was indicted in 2019 for breaches of trust, bribery and fraud; his trial is underway.

But it was fraught with delays, in part because as prime minister, Netanyahu used the power of the state to resist what he called a “witch hunt.” The trial triggered protests by his Likud party and an unsuccessful bid to secure immunity, among other stall tactics. Netanyahu was even reelected while under indictment.

Israel is partly a testament to the rule of law – and partly a cautionary tale about prosecuting leaders in democracies.