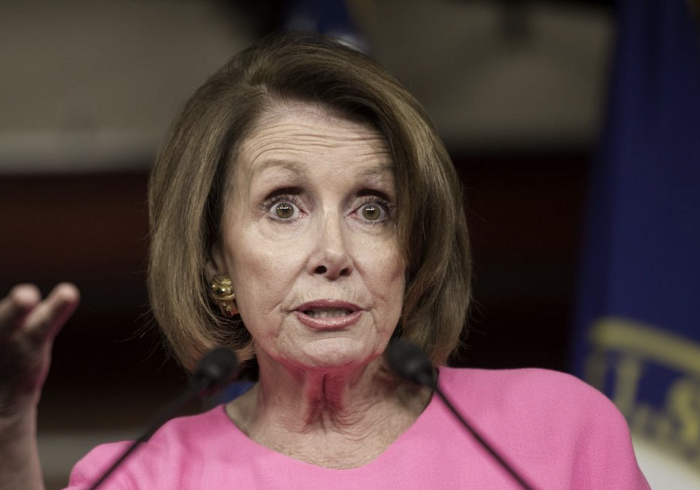 The First And Only Woman To Serve As House Speaker, ‘Nancy Pelosi’ Will Step Down From Leadership

Nancy Pelosi, the first and only woman to serve as speaker of the U.S. House of Representatives, announced Thursday she will step down from party leadership after a historic two-decade tenure leading House Democrats.

Pelosi, who was just elected to another term in the House, said she will remain in Congress but step aside from leadership to pave the way for the next generation.

“With great confidence in our caucus, I will not be seeking reelection to Democratic leadership in the next Congress,” she said. “For me, the hour has come for a new generation to lead the Democratic caucus that I so deeply respect, and I’m grateful that so many are ready and willing to shoulder this awesome responsibility.”

The highly anticipated announcement from Pelosi came after Republicans won back control of the House of Representatives in the 2022 midterms.

Pelosi, 82, has served in Congress for 35 years and as speaker twice. She first held the position from 2007 to 2011 and was selected as speaker again in 2019. After being reelected in 2020, Pelosi indicated that term would be her last as speaker.

Pelosi highlighted the progress in women’s representation in Congress since she first took office.

“It’s been with great pride in my 35 years in the House, I have seen this body grow more reflective of our great nation, our beautiful nation,” she said to resounding applause. “When I came to the Congress in 1987, there were 12 Democratic women. Now there are over 90, and we want more.”

Debbie Walsh, director for the Center for American Women and Politics, called Pelosi “​​a symbol of the heights of aspiration for American women and girls.”

“She has shown the world and future generations the unlimited potential of women’s leadership,” Walsh said.

Pelosi’s announcement also comes after a brutal assault on her husband, Paul Pelosi, who was attacked and severely wounded by a intruder who broke into the couple’s San Francisco home, reportedly looking for the speaker.  The episode, which followed years of attacks demonizing and vilifying Pelosi, highlighted the unique dangers and threats faced by female politicians.

Pelosi called Paul her “beloved partner in life and my pillar of support” in her speech.

Pelosi was considered one of the most effective legislators and political negotiators in Washington, ushering President Barack Obama’s signature health care law, the Affordable Care Act, through the often fractious House of Representatives amid stiff Republican opposition.

Pelosi also supervised the passage of the Dodd-Frank Wall Street Reform Act, the repeal of a 1993 law known as “don’t ask, don’t tell” that directed the Defense Department not to ask about military applicants’ sexual orientation, and two major components of President Joe Biden’s economic agenda.

In a statement, Biden praised Pelosi as “the most consequential Speaker of the House of Representatives in our history.”

“With Nancy, you see a father’s daughter who learned by his side how to win and govern,” he said. “With her leading the way, you never worry about whether a bill will pass. If she says she has the votes, she has the votes. Every time.”

She was also speaker during two impeachments of then-Republican President Donald Trump — the first in December 2019 and the second in January 2021. The Senate acquitted Trump in both instances.

During Trump’s four years in the White House, he and Pelosi frequently sparred, and she was one of his fiercest critics. During Trump’s February 2020 State of the Union address, Pelosi, who was seated behind him, tore up her official copy of the speech, drawing criticism from Republicans who said it was disrespectful. Pelosi reportedly later told colleagues: “He shredded the truth, so I shredded his speech.”

Pelosi was an early supporter of LGBTQ+ rights, opposing the Defense of Marriage Act and advocating for AIDS patients.  A devout Catholic, she also consistently supported abortion rights and fought to expand federal funds for family planning services throughout her career.

Pelosi was born in 1940 in Baltimore, Maryland, as Nancy D’Alesandro, the youngest of seven children and the only girl in a politically active Italian-American family. At the time of her birth, Pelosi’s father, Thomas D’Alesandro Jr., was a Democratic member of Congress. He would go on to become mayor of Baltimore, as would one of her brothers.

Pelosi came of age at a time when few women held elected office and the women who were involved in politics, like her mother, primarily operated behind the scenes volunteering for free and advising men.

Pelosi married Paul, a financier, in 1963 and had five children in six years. After the couple moved to California, Pelosi got involved in local politics there and quickly distinguished herself as a talented fundraiser and campaign surrogate, including hosting big Democratic fundraisers at the couple’s home. In addition to her legislative leadership, Pelosi used her fundraising prowess and influence to bolster Democrats on the campaign trail.

Pelosi, like many women of the time, waited until most of her children were grown to start her own political career. She didn’t run for Congress until her youngest daughter, Alexandra, was a teenager, and was elected to her San Francisco-area House district in 1987.

On Thursday, she drew a line from a visit to the Capitol with her father when he was in Congress to now.

“When I first came to the floor at 6 years old, never would I have thought that someday I would go from homemaker to House speaker,” Pelosi said.