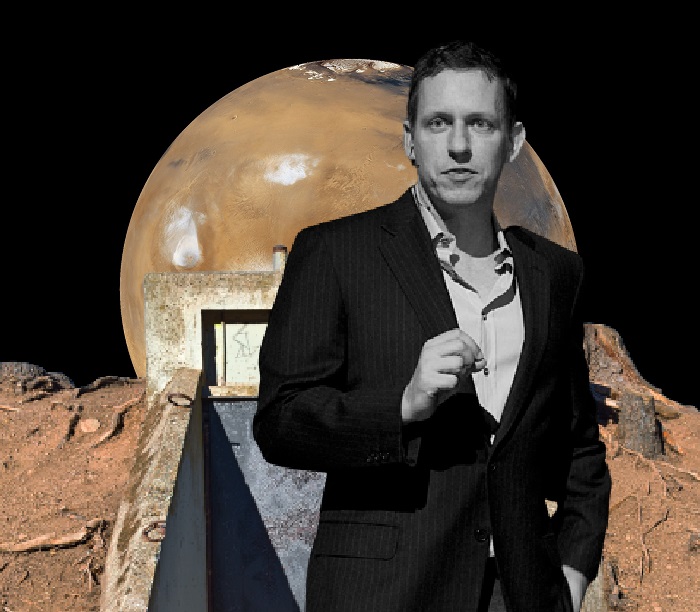 Doomsday Bunkers, Mars And ‘The Mindset’: The Tech Bros Trying To Outsmart The End Of The World

Douglas Rushkoff’s newest book, Survival of the Richest: Escape Fantasies of the Tech Billionaires, grew out of a brilliant 2018 Medium article of the same name, which went viral and had people (aka his US editor) clamouring for a full-length treatment.

In both pieces, Rushkoff recounts being invited to speak about “the future of technology”, only to find himself at a luxury desert resort in an undisclosed location, speaking to a select audience of five unnamed hedge fund billionaires. Within minutes, the conversation takes on a distinctly prepper-ish tone. One of the CEOs tells Rushkoff about his newly completed underground shelter, then asks, “How do I maintain authority over my security force after the event?”

Rushkoff is bemused, but also grimly amused by it all. “Here they were, asking a Marxist media theorist for advice on where and how to configure their doomsday bunkers,” he writes. “That’s when it hit me: at least as far as these gentlemen were concerned, this was a talk about the future of technology.”

So far, so head-spinningly good. Unfortunately, however, Rushkoff moves away from the billionaires and their intriguingly delusional self-preservation tactics, into a realm of high ideas.

Over the next 12 and a half chapters, Rushkoff offers a Grand Unified Theory of tech billionaire ideology. Inspired by a 1995 article, “The Californian Ideology”, he chooses to call this “The Mindset” – a frustratingly vague term that doesn’t really clarify things.

At times, “The Mindset” is roughly synonymous with the ideology of libertarianism; at others, it is much more amorphous – referring to everything from growth-based capitalism, to colonialism, to narcissism. And as Hugo Rifkind notes in The Times, “while the Mindset is interesting, it’s not nearly as interesting as the bonkers escape plans to which it leads”.

If you’re after a primer on the various ills of late capitalism, then strap yourself in and enjoy this wide-ranging, freewheeling romp by one of the US’s most entertaining digital culture raconteurs.

His subjects include – but not are not limited to – monopolies, financialisation, behavioural science, “scientism” (Richard Dawkins, Steven Pinker et al.) and the sex crimes of Jeffrey Epstein. There’s the 1980s business savvy of General Electric CEO Jack Welch and “the Western, linear drive towards progress”. Our estrangement from nature. The persistence of Aristotelian plot structures. And even “Western language systems, which tend to be more noun-based than many of their counterparts”.

Rushkoff is an accessible, pithy writer, with no shortage of examples, analogies and anecdotes to string together. That said, his relentless synthesising and breathless proclamations also make the book feel a bit shambolic, a bit over-reachy. (For instance, “The Mindset prefers straight lines, linear progress and infinite expansion over the ebbs and flows in the real world.”)

This is especially so if you’re searching for the what-it-says-on-the-label bits – the tech bros and their bizarre survival plans.

Case in point: Rushkoff tells a quite-long story about arguing with Richard Dawkins about morality at a Manhattan dinner party in the 1990s. Great. He then claims that Stephen Pinker and Daniel Dennett believe “the brain is mere hardware” and “humans are just robots running programs”. Sure. Next, he points out that Dawkins, Pinker and Dennett were all photographed on Jeffrey Epstein’s private jet on their way to a TED talk. Guilt by association fallacy, but okay. As a finale, Epstein is described as “truly the model, self-sovereign, transhumanist billionaire prepper”.

Here’s the problem: while Jeffrey Epstein was a lot of terrible things, he wasn’t a prepper, in the proper sense of that word. There’s no record of him saying he thought society was about to collapse, or that he was making any just-in-case plans. More generally, none of the aforementioned four are Silicon Valley titans, or billionaires – they’re three scientists and one multimillionaire Wall Street financier/paedophile. And they’re only tangentially relevant to the matter at hand.

Also, given how much other ground is covered, it is a little surprising that Rushkoff doesn’t name check that ur-text of cyber libertarianism, The Sovereign Individual: How to Survive and Thrive During the Collapse of the Welfare State (1997), by James Dale Davidson and William Rees-Mogg.

Davidson and Rees-Mogg dream of a time when individuals will be freed from the shackles of government, fiat currency (government-issued paper money, not backed by a commodity such as gold) and law in general. (William Rees-Mogg’s son, UK politician Jacob Rees-Mogg, was one of the most vocal cheerleaders for Brexit.)

In this thrilling new age, a “cognitive elite” will be able to rule – or ignore – the rest of the world, as they see fit. The Sovereign Individual is a hugely influential text in the start-up world; early Facebook backer, Paypal co-founder and conservative libertarian Peter Thiel, who is infamous in New Zealand for buying his citizenship and attempting to build luxury bunkers in the wilderness wrote the foreword to the 2020 reprint.

Survival of the Richest contains an excellent anecdote about Rushkoff being in a Zoom meeting with some tech developers on 6 January 2021, which is derailed by the breaking news of an attempted coup at the Capitol building (if you think that’s bad, wait till you hear how the programmers react!).

Jeff Bezos has a yacht with a helipad that serves as a companion yacht to his main yacht, which has large sails that would get in the way of his helicopter during takeoff and landing.

There are some extremely sharp reflections on artificial intelligence:

Whether AI will develop human and superhuman abilities in the next decade, century, millennium, if ever, may matter less right now than AI’s grip over the tech elite, and what this obsession tells us about The Mindset.

Regarding the prospect of artificial intelligence putting millions of people out of work in the near future, entrepreneurs such as Reid Hoffmann (LinkedIn CEO) and Mark Cuban (startup dude, billionaire) are worried that unemployed humans might coalesce into vengeful, billionaire-resenting mobs and attack them. Though they’re not worried about ruining all those people’s lives in the first place.

But – and this is a little ironic – there’s precious little biographical detail about Mark Cuban, or Reid Hoffmann, or any of the other bros in the book. Their function is purely as symbols of rapacious greed: embodiments of The Mindset. They are not examined as deeply flawed, but nonetheless complex human beings.

Dismissive rather than curious

In some ways, this is a question of method, and access. While Rushkoff mixes in some pretty wild company on his global speaking gigs, and has serendipitous encounters with some outlandish figures, he’s not doing any journalistic or enthnographic legwork here.

In short: he hasn’t interviewed any of tech billionaires he writes about. He doesn’t really know what motivates them – or at least, not all of it. When it comes to these wealthy, selfish people’s strategies to survive “the event”, Rushkoff is dismissive rather than curious. He is adamant that a billionaire’s prepper scheme – any scheme – just won’t work.

In Chapter One, he contends that “the probability of a fortified bunker actually protecting its occupants from the reality of, well, reality, is very slim”, because “the closed ecosystems of underground facilities are preposterously brittle”. If your underground hydroponic garden is overrun by mould or bacteria, there’s no “do-over”; you’ll just die.

small islands are utterly dependent on air and sea deliveries for basic staples […] the billionaires who reside in such locales are more, not less, dependent on complex supply chains than those of us embedded in industrial civilization.

Seasteading – the libertarian idea of building autonomous, floating mini-states, which operate outside of state control – is mentioned, but not discussed in any detail. And the modest proposals of Elon Musk, Richard Branson, Jeff Bezos et al. to commercialise space travel and colonise Mars are rejected with the observation “only trillionaires will actually make it to space to terraform planets, anyway”.

This might be true enough – but it’s also the ostensible subject of the book, and as such, perhaps worth spending a bit more time on.

For Rushkoff, then, “the billionaire bunker strategy is less a viable strategy for apocalypse than a metaphor for this disconnected way of life” – a canny insight, to be sure. But those bunkers aren’t only metaphorical; they’re also very real, and large, and expensive, and fascinating in their logistic intricacies and (im)possibilities.

If Survival of the Richest had told us more about this insane infrastructure, and about the people who dreamed it up, we might be able to better understand the unmistakably phallic spaceships as symbols, too.

Readers with specific interest in doomsday bunkers, and what they might represent in ideological terms, should seek out Bradley Garrett’s Bunker: Building for the End Times (2020). Mark O’Connell writes insightfully about Peter Thiel’s New Zealand boltholes as a symptom of extreme libertarian misanthropy in Notes from an Apocalypse: A Personal Journey to the End of the World and Back (2020).

Those wishing to learn more personal details about the computer nerds and venture captial bros who hold such outsized sway in contemporary life should read Max Chafkin’s 2021 biography The Contrarian: Peter Thiel and Silicon Valley’s Pursuit of Power, or Ashlee Vance’s 2015 book Elon Musk: How the Billionaire CEO of SpaceX and Tesla Is Shaping Our Future, as well as David Runciman and John Lanchester’s incisive essays about Thiel and Musk respectively in the London Review of Books.

Or, what the hell, rewatch The Social Network.

Tom Doig, The University of Queensland

Tom Doig, Lecturer in Creative Writing, The University of Queensland

Published in TECH and VIDEO