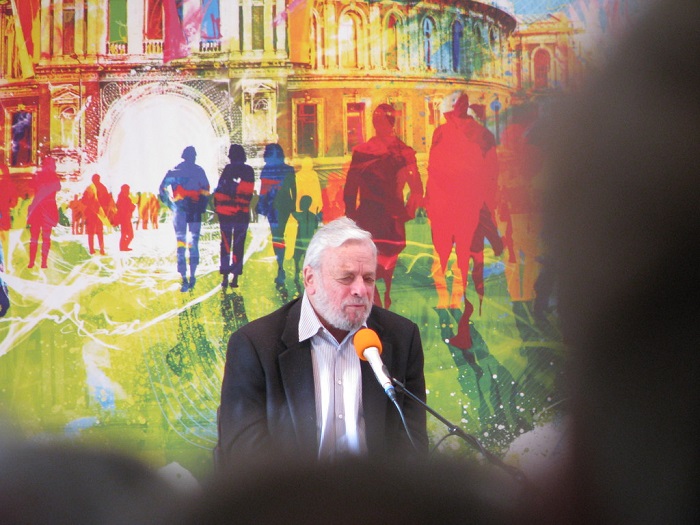 Long before the numbing regularity of school shootings, the Kyle Rittenhouse trial and the current Supreme Court debate over whether to further relax gun laws, composer and lyricist Stephen Sondheim was sounding the alarm about the role of guns in American culture.

Sondheim, who died on Nov. 26, 2021, had a knack for using stage and song to explore America’s dark, violent underbelly.

One of his lesser-known works, “Assassins,” just started a new run off-Broadway by the Classic Stage Company. Originally produced in 1990, the musical is a collective biography of the historical figures who attempted to assassinate U.S. presidents, four of them successfully. Nine of the 13 assassins or would-be assassins are included, from John Wilkes Booth, who killed Abraham Lincoln, to John Hinckley, Jr., who shot Ronald Reagan in 1984.

These malcontents hardly seem like promising subjects for a musical. But Sondheim brilliantly deployed musical theater to explore America’s curious fascination with firearms and the pivotal role of assassinations in the republic’s history.

To Sondheim, assassins, like everybody else, are in pursuit of the American dream. As they battle delusions, fight against perceived political injustice, long for celebrity or seek community, they turn to guns to accomplish their goals. His score consists of uniquely American musical styles drawn from different periods of U.S. history, including ragtime, patriotic marches and folk ballads.

In the program notes from a 2017 revival, Yale drama school dean James Bundy wrote, “We know the assassins as well, because we see them in the media, and in the mirror, now.”

More than three decades after its first production, “Assassins” retains its historical importance and derives new meaning from its prescience.

Shooting their way into history

The show opens at a fairground shooting gallery, where a gun salesman doles out weapons to the characters. In choosing a carnival for the scene, Sondheim underlines the point that assassination is an act aimed at capturing the public’s attention.

He boldly and controversially tries to get inside the mind of the assassins by giving voice to their demons – a technique he also used in the macabre musical “Sweeney Todd.”

He suggests that all the people who have tried to shoot U.S. presidents – individuals whose lives spanned centuries, class divides, political beliefs and religious convictions – share a common psychological profile: They were all ambitious, and they all failed to realize their dreams.

Booth, for example, was reportedly depressed by bad reviews of his performances as an actor. Charles Guiteau, who shot President James Garfield in 1881, was angry that he hadn’t been appointed as an ambassador as a reward for his work in Garfield’s campaign. “I wanted it done [with a pistol] in an American manner,” he later said.

And so they take revenge for their individual failure by trying to kill the president – the personification of the American Dream. The Declaration of Independence declared “the pursuit of happiness” as an American right. But what recourse do unhappy people have?

By carrying out what 19th-century anarchists called “the propaganda of the deed,” the assassins intend to write – or shoot – themselves into history.

“What a wonder is a gun,” Sondheim writes in one number, titled “The Gun Song.” It continues:

In “Assassins,” the gun serves not as a tool of self-defense – which the gun rights lobby touts as a reason to buy a firearm – but as an instrument of self-expression and self-realization.

The assassins, who saw themselves as the “good guys with guns,” are, in a perverse way, the epitome of American individualism.

The term “individualism” – meaning attaching moral value to individual autonomy – was coined by the French thinker Alexis de Tocqueville in his celebrated work “Democracy in America,” published in 1835. He was the first to use it in English.

The word took off at around the same time that Samuel Colt invented some of the mechanisms that made firearms more lethal: His revolver was patented in 1836.

The fantasy of fending off enemies with a gun would appear in other stage works. In one of the most popular American musicals of the 20th century, 1940’s “A Christmas Story,” a boy believes that his dreams will come true if he can only get a Red Ryder BB gun as a Christmas present, despite the concerns of his parents, his teachers and even Santa.

The 15-year-old student in the recent Michigan shooting allegedly used a gun that he had received as an early Christmas present to kill four students at his school.

Everybody’s got a right?

Great playwrights have always used the theater to narrate and interrogate the history of their society.

William Shakespeare used his more speculative plays to comment on oppression within his own society, at a time when the Protestant Queen Elizabeth was harshly persecuting Catholics. Shakespeare couldn’t write a play criticizing the Queen, so he wrote a play about killing a tyrant in ancient Rome.

In fact, in his history plays, assassination – whether it’s in “Julius Caesar” or “Macbeth” – is a recurrent theme. The first recorded assassination of a political leader with a gun was the Earl of Moray, who was felled by a musket shot in Scotland in 1570. This was followed by the assassination of William the Silent in Delft in 1584, who was shot and killed with a handgun. Shakespeare was surely aware of both events.

Unlike in plays by Shakespeare, the assassinations in Sondheim’s work are carried out not by rival leaders, but by ordinary people.

“[‘Assassins’] dares its audience to see our country and assess our national myths through the eyes of our villains instead of our heroes,” director Michael Thomas, who revived the musical in the fall of 2021, said.

At the end of the musical, the assassins and would-be assassins regroup at the shooting range, with Lee Harvard Oswald, Leon Czolgosz and Lynette “Squeaky” Fromme among their ranks.

They proudly restate their mantra – “Everybody’s got the right to be happy” – before loading their guns and opening fire on the audience while singing:

A recent “Assassins” revival in the U.K. sought to make a connection to our present moment. The last scene, chillingly, is of a child buying a gun out of a vending machine.