Gaming phones are an ancient idea. Nokia released the N-Gage, which was like a phone built into a game controller, in 2003. And it didn’t do very well. But the concept has made a resurgence recently thanks to devices from Razer, Asus, and Xiaomi. Now, Xiaomi has launched its second-generation gaming phone called the Black Shark 2.

The Black Shark 2 has a suite of features that make it a great way to play games on the go. It’s also affordable, starting at $420 for the version with 128GB of storage and 6GB of RAM.

But I’m less convinced than ever that anyone really needs a gaming phone even if this a great example of the form.

I used the Black Shark 2 to play a variety of games, and it was comfortable relative to other smartphones. And a lot of that comes from Xiaomi’s smart design.

It has bezels on the top and bottom, which gives your thumbs a place to rest without touching the screen in landscape mode. It also has a metal body and excellent cooling, which helps the Snapdragon 855 processor dissipate heat. While similar phones can get warm and even hot to the touch, the Black Shark 2 always ran cool for me.

The device also has snappy haptics and high-quality front-facing stereo speakers. Both of these features help make the device feel more immersive. 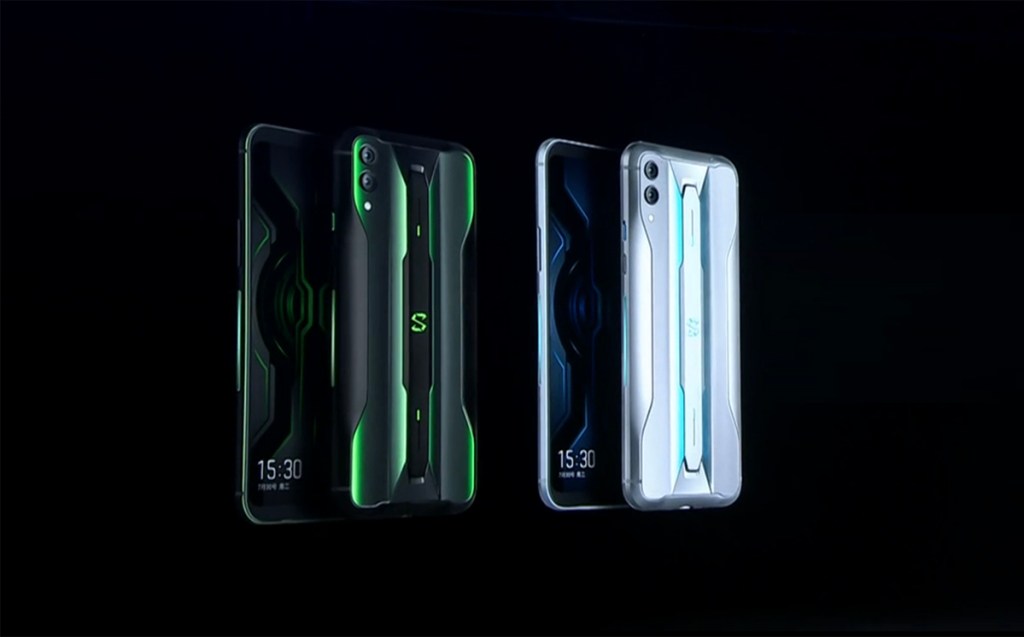 Above: The Black Shark 2 definitely has a gaming style.

Beyond the overall design, Xiaomi also included a high-refresh-rate touch sensor. The screen updates at 240Hz, which enables the device to respond to touches in an instant.

That responsiveness is evident in both games and the interface. Browsing through menus is especially snappy.

Theoretically, this should also give you an advantage in multiplayer competitive games. I’m not god enough at any mobile game to test this. Still, I would imagine that a mobile MOBA player would see the benefit.

The Snapdragon 855 CPU and Adreno 640 GPU make the Black Shark 2 more than powerful enough to handle every mobile game. Call of Duty Mobile defaulted to the highest visual settings, and it ran without any issues or hitching. That’s the same CPU/GPU you can get from the $800 Pixel 4 when it launches later in October.

The Snapdragon 855 is noticeably more power efficient than previous generations of that chip. And Xiaomi helps that even more with a 4,000mAh battery. Black Shark 2 easily gets through a day without having to charge. If you are a light user, you can probably get more than 36-to-40 hours of use before running the battery down to 0%.

The Black Shark 2 has some questionable oversights. One of the biggest is the lack of expandable storage. The internal storage starts at 128GB, which is nice. But games can take up a lot of space, and I always want to have the option to add more with a microSD card.

Prices for microSD cards are dropping fast, and it’s nice not to worry about a long video suddenly taking up all the space on your device.

The other big missing feature is a high-refresh screen. Xiaomi is using a 60Hz OLED. It looks really nice, and 60Hz is great for most games. But more phones are going up to 90Hz or even 120Hz for the Razer Phone 2.

When games do support those higher refresh rates, that increased smoothness is obvious. But even scrolling and browsing the internet at 90 frames per second is a much better experience.

Black Shark 2 uses Xiaomi’s JoyUI Android skin. It is mostly just stock Android but with the option to go into something called Shark Space. You can activate Shark Space with a dedicated hardware button, and it’s a pretty useful gaming skin. It closes all other processes so you get the best performance. Shark Space also gives you easy-to-access shortcuts for capturing screenshots and gameplay video.

But JoyUI has some frustrating bugs. While the screen is typically responsive, it often has serious lag problems that come out of nowhere. I frequently have to wait for the keyboard to catch up with me.

The underscreen fingerprint scanner is another great feature with some odd quirks. Occasionally, the system just doesn’t want to work. I will put my thumb on the scanner, and it won’t register no matter what. I will have to put the phone back to sleep, and then the scanner will work after I wake it up again.

The Black Shark 2 is a good phone. When you look at the price, it’s actually excellent. It has a good camera. That finger print scanner (when it’s working) is buried under the screen, which is cool. And the screen is really sharp for all kinds of content. You can even buy controllers that snap onto the edge of the Black Shark 2 like a Switch. Those work with mobile games, but you can also use that with streaming services like GeForce Now or Steam Link.

And if you want something that is good for gaming and good for pictures but only costs $500 with 256GB of storage and 8GB of RAM, you can’t beat the Black Shark 2. That’s a great deal.

But you can definitely get similar gaming performance from a Samsung Galaxy S10 or Google Pixel 4. And while those phones are more expensive, you can probably buy them through your carrier, which has its benefits. You will also get significantly better cameras. Heck, the Pixel 4 even has a 90Hz screen. Not to mention Google’s software features like its offline audio transcription.

The Black Shark 2 doesn’t distinguish itself as a gaming phone. I don’t think any phone does anymore. But it is a very good alternative to the more expensive flagships.

Xiaomi’s Black Shark 2 is available now starting at $420. Xiaomi sent us a sample unit for the purpose of this review.