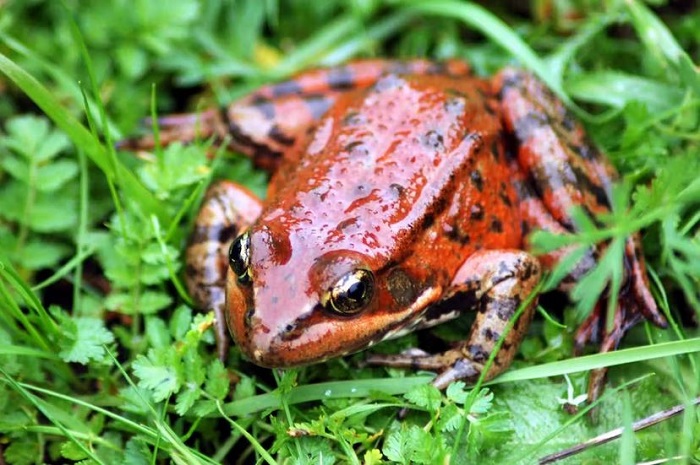 When the COVID-19 pandemic first emerged, many wildlife disease researchers like me were not too surprised. Some were intrigued it hadn’t happened sooner; after all, it is our job to observe, describe and study pandemic dynamics in animals.

Amphibians, for example, have been undergoing a global panzootic – the animal version of a pandemic – for decades. In the late 1990s, researchers identified the amphibian chytrid fungus, which causes the often-lethal disease chytridiomycosis, as the probable culprit behind frog and salamander declines and extinctions from Australia to Central America and elsewhere that began 10, 20 or even 30 years before.

Scientists have found this pathogen on every continent that amphibians inhabit, and the extensive global amphibian trade has likely spread highly lethal strains around the world. The amphibian chytrid fungus is widespread in some geographic regions, and, like the virus that causes COVID-19, it can mutate rapidly and take new forms that cause varying disease severity.

Conservation translocation is an increasingly popular way to recover species that have experienced extensive population declines. It involves moving organisms to reestablish populations that have gone extinct, supplement existing ones or establish new ones in areas where the species was not previously present. However, when the amphibian chytrid fungus is prevalent in the landscape, frogs are likely to get sick again, hampering the success of translocation.

To avoid the setbacks of disease, researchers are using a tool often employed against human pandemics: inoculations akin to vaccines.

In our recent study, my research team and I inoculated threatened California red-legged frogs against chytrid fungus before translocation by exposing them to the chytrid fungus in the laboratory. We wanted to see if we could activate their immune systems and give them an advantage over the fungus once they are released. Our results were unexpected.

Nothing a cocktail won’t cure

Since 2017, Yosemite National Park has been actively translocating California red-legged frogs to Yosemite Valley, where the chytrid fungus is already present. We used a small subset of these translocated frogs in our study.

We collected wild frog eggs at a place where the species is thriving, about 100 miles northwest of Yosemite Valley, then raised them in captivity at the San Francisco Zoo. Once they metamorphosed into juvenile frogs, we bathed 20 in a “cocktail” of four live, active strains of the fungus. After three weeks, they were given a bath of an antifungal drug to halt the infection. Another 40 frogs that were not exposed to the fungus were also given a bath of an antifungal drug.

What we found was surprising: 35% of frogs infected only once successfully cleared the infection without vaccination or an antifungal drug. This suggested that they have some measure of innate immunity, meaning their immune system’s first line of defense was able to fight off the fungus. In addition, frogs infected a second time had a 31% overall lower rate of infection than those that were infected only once. This suggested that the vaccinelike treatment also works by stimulating adaptive immunity, meaning their immune system learned to recognize the fungus from their first exposure and fight it off more efficiently. None of the frogs died from their fungal infections.

Before releasing them to the wild, we treated the frogs with an antifungal drug and monitored to make sure they were disease-free. We attached tiny transmitters with beaded belts around their waists so we could track their infections and survival over three months.

Unexpectedly, we found no difference in disease burden between the frogs that had never been infected and those that had been previously infected in the laboratory. This suggests that immunizing this species for chytrid fungus, at least in Yosemite, may be unnecessary to ensure their survival after reintroduction.

Indeed, the California red-legged frogs released into Yosemite Valley are thriving three years after our experiment and six years after their first translocation. They are hibernating successfully through the cold winters and emerging early in the spring for reproduction.

Hope for the future

Our study takes a new approach to the emerging tool of inoculation against the chytrid fungus. By combining ex situ, or laboratory, experiments with in situ, or in the field, implementation, we put lab observations to the test in the real world. This type of work strengthens collaborations between wildlife managers and zoos, which are increasingly needed as the biodiversity crisis accelerates.

Though California red-legged frogs in Yosemite Valley didn’t seem to need vaccinations, this doesn’t mean that other imperiled amphibian species around the world do not. Research on chytrid inoculations in other species have had mixed results, ranging from not improving survival to reducing infection burden associated with increased survival. One of the primary challenges of this approach to conservation is that even if vaccination increases survival after initial release, this immunity does not carry forward to successive generations.

There is hope, however. Researchers are working to identify the genetic signatures associated with immunity to the chytrid fungus. If successful, breeding programs can artificially select for – and perhaps even gene-edit – protective traits to give frogs a leg up on a pathogen that has devastated amphibian populations worldwide.